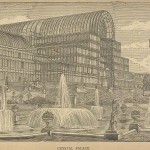 On 13 February 2012, I’m giving a lecture on the Olympic Games for the London Parks & Gardens Trust. In an illustrated talk, I will look at the role of London’s parks in London’s past Olympic Games, held in 1908 and 1948, and how the 2012 Olympic Games are creating a new parkland. I will also dip into earlier Olympian history, like the 1866 National Olympian Games, which were held in the park at Crystal Palace.

The lecture will take place at The Garden Museum in Lambeth Palace Road. Doors open at 6.30 pm, and the talk starts at 7.00 pm.