When did we last win the World Cup? 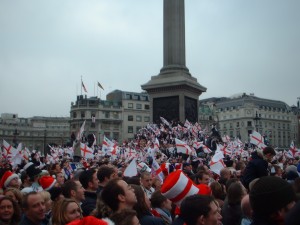 "What have we won this time?"

For England, the Rugby Union World Cup ended last weekend with a poor quarter-final performance against France. The team’s exit took me back to one of my favourite questions in sports history: ‘When did we last win the World Cup?’ This is a question that I regularly ask my students, because it is a great way to get them thinking about the subjectivities involved in even the most basic historical questions.

First off, there’s the ‘we’. Who does it refer to? When I, an Englishman, ask the question in a class made up mainly of English students in an English university, the shared assumption is that I’m talking about England, so the answers that I get back are always about English national teams – I’m told about the rugby union World Cup victory over Australia in 2003, and the football World Cup defeat of West Germany in 1966. When I ask if anyone doesn’t share this assumed English identity, then all sorts of other versions of ‘we’ come out. There was the German student who grinned at me and asked ‘Where shall I begin?’, the half-Welsh/half-French student who said ‘I think I’ll let my French half decide’, and the Scottish student who said ‘Never’ – Scotland’s excellent record in the Elephant Polo World Cup has clearly passed many people by.

Then, of course, we need to think about what we mean by ‘the’; which World Cup are we talking about? Most people think of football and rugby first. When I ask them to be more specific, they break it down into the men’s versions of both sports, and realise that they are thinking of rugby union, not rugby league. Once we overcome these preconceptions, then people start to recognise a much wider range of triumphs that they can draw on. The hat-trick of World Cups won by the England women’s cricket team in 1973, 1993, and 2009, the brace of World Cups won by the Great Britain men’s Rugby League team in 1954 and 1972, and the England women’s Rugby Union World Cup triumph over the USA in 1994, all deserve as much right to be celebrated as the more obvious wins of 1966 and 2003.

‘When did we last win the World Cup?’ A simple question? There is no such thing in sports history. The answers I get are deeply subjective, based on unexamined assumptions about sport, gender, and identity. Whenever we think about the past, we need to reflect on how the language of our questions shapes our expectations about what the answer will be.