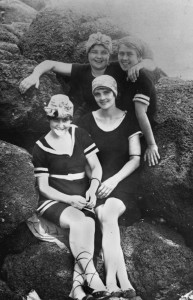 In 2008, Winchester School of Art hosted a ground-breaking international conference on knitting, called In The Loop. I was lucky enough to be invited to study the School’s knitting archive, which contains all sorts of goodies for sports historians, particularly an unrivalled collection of knitting patterns for sports clothing from across the 20th Century. I gave a paper at that first conference, and it proved so popular that I have since talked about sporting knitting patterns as a keynote speaker at conferences in Bolton, Malmo, Leicester and elsewhere. There was an In The Loop 2 in 2012, and now In The Loop 3 is being planned for 5-7 September 2012.

I’l be giving a keynote paper on knitting and the Olympic Games, and we are hoping to get a range of other papers on knitting in sport, alongside the conference’s other themes on knitting’s cultural history. The conference will take place at Winchester Discovery Centre, and its organisers are Nick Coates and Linda Newington.

If you want to find out more, please contact the Conference Administrator, Judith Horgan, on J.A.Horgan@soton.ac.uk.