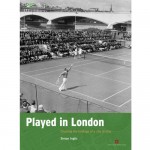 The English Heritage sports project Played in Britain is staging an exhibition and a series of talks around the theme of Played in London at The Gallery in Farringdon throughout May 2012. It starts on 3 May with Simon Inglis, acclaimed author and creator of the Played in Britain series, talking about London’s sporting heritage. Then each Thursday evening, Simon will be in conversation with a range of authors and practitioners. I’m the guest for 10 May, talking about London’s Olympic heritage, with subsequent weeks including Olympic Stadium architect Rod Sheard, swimming pool architect Keith Ashton, swimming pool historian Ian Gordon, and pub games historians Arthur Taylor and Patrick Chaplin. It looks set to be a highly informative, entertaining, and innovative series.

For full details, see the Played in Britain website.