As I write, my football team, Brentford FC, are halfway through their Football League Trophy match against AFC Wimbledon. It’s 1-0 to Brentford at half-time. I couldn’t make the game tonight, but my thoughts, as ever, are there, especially as this is the only knock-out competition in which we have a chance of making it to Wembley. However, tonight I’m thinking less about that and more about a match I went to against the old Wimbledon FC, the original club from before the Milton Keynes Franchise arrived and the grassroots AFC Wimbledon emerged.

It was a League match in the old Fourth Division back in January 1978. Wimbledon were enjoying their first season in the League, and we were hoping to escape from the basement. We had already beaten them 4-1 at Griffin Park back in August, and my brother David and I made the bus trip across south-west London to see the return fixture. I remember the ground as pretty run-down and unloved, although the club had done brilliantly in getting into the League: indeed, our grandfather, who had played for Dulwich Hamlet against Wimbledon back in the 1920s, found it hilarious that this could ever be a league ground. 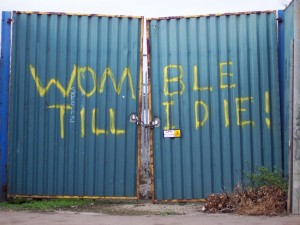 I don’t remember much of the match – I was 11, and I have to be honest and admit that I’ve had to look up the score at the wonderful stats site 11v11 (it was a 1-1 draw, for the record). My main memories are of the Brentford fans all arriving early and strolling into the home end. These were the bad old days of football hooliganism, remember, and fans bragged about their ability to take an end, but we certainly weren’t hooligans and I didn’t see any hint of fighting, so the impression I got was that the home fans can’t have been that bothered. I remember loud singing, and a good atmosphere, and I remember that David had a home-made banner – some partisan message painted on an old sheet. I remember the obligatory pitch invasion at the end – totally normal for lower league matches at that time. The only scary note came as David and I walked the length of the pitch to leave at the far end, when a Wimbledon fan who had obviously clocked our banner came up behind and relieved us of it. Again, no violence or intimidation, just a bit of casual pickpocketing.

Brentford left Division 4 at the end of that season, and so much of that promotion season still remains fresh for me – it was a formative experience, the first time that my team had really achieved anything. Wimbledon took a bit longer, but went on to their meteoric rise to the First Division and FA Cup triumph before their equally spectacular fall into debt and destruction. Now that AFC Wimbledon are back in the League alongside the interlopers from Milton Keynes, the circle is feeling complete. But Plough Lane, that stadium that my grandfather laughed at and where we had our banner nicked, is long gone. Wimbledon left it in 1998 for their nomadic last few years, and the ground was demolished in 2002. There is now a housing estate on the site, with a memory of the club resonating through the estate’s name, Reynolds Gate, named for Wimbledon legend Eddie Reynolds.

In the time it’s taken me to write this, the score in tonight’s game has gone from 1-0 to 5-1. Brentford are on the verge of their best victory for some time. For me, though, sitting here and following it on-line, the abiding memory that will come whenever I hear the names of Brentford and Wimbledon together, will be of a cold January in the late 1970s and a stolen banner.