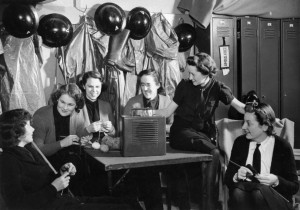 Over the last few years, I’ve been involved with In The Loop, a fascinating project run by Winchester School of Art on the history, politics, and practice of knitting. I first got involved when I gave a paper on sports-related knitting patterns at their inaugural conference in 2008, which ended up being picked up by other conference organisers – since then, I’ve given keynotes on this rather unlikely subject at conferences in Bolton, Brighton, Southampton, and Malmo, and written it up for an American craft magazine. Then, in 2012, I spoke at In The Loop 3 on knitting and the Olympic Games, a paper which I’ve also taken to the sources with a paper called ‘Sweaters and the Services’. I’ll be touching on the portrayal of knitting in wartime propaganda, on the wartime knitting boom, and on the representations of service men and women in patterns of the First and Second World Wars.AGM of the Knitting and Crochet Guild, and which forms the basis of my new article in a knitting-themed issue of Textile: The Journal of Cloth and Culture, out in March 2014. For In the Loop 2014, which takes place at Southampton and Winchester on 2-3 April, I’m moving away from sport but keeping a focus on knitting patterns as historical

Click here for full details of In The Loop, and for the programme for the study days. Click here for details of the Knitting Reference Library at Winchester School of Art. You can also follow In Loop on @intheloop3.