I spent yesterday morning in a radio studio in Clerkenwell. This is not a normal way for me to spend a Thursday, but I was invited in to work on a fascinating project with Honda as part of their preparation for the Goodwood Festival of Speed, which starts next week. Honda had commissioned a poll of 2,043 adults from around the UK to find out about people’s favourite sporting moment, and the sportswomen and men who they see as ‘unbeatable’. There were a few qualifications – the sporting moments had to be British triumphs, while the heroines and heroes could be from anywhere. The poll led to the compilation of three Top 10 lists, and I was asked to front the publication of these lists through a series of radio interviews. I did 13 in all, including many BBC regional channels and a number of commercial stations. It felt a bit groundhog day after a while, as some of the interviewers inevitably asked similar questions, but it was a fascinating process, and it gave me the chance to reflect on the kind of qualities that people want in their sporting moments and icons. 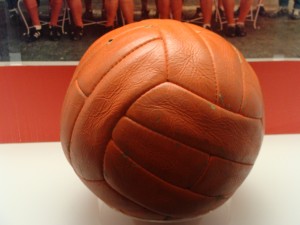 The ball from the 1966 World Cup Final, now in the National Football Museum in Manchester

Topping the list of Greatest British Sport Triumphs of Our Time was, inevitably, the England men’s football team winning the World Cup with their 4-2 victory over West Germany in 1966. This felt a little like when people compile lists of best albums or best movies of all time, and Sgt Pepper and The Godfather come out on top. I love both, but it sometimes feels like they are the starting point and then people go on from there. With 1966, though, there is an added dimension – after all, both The Beatles and Francis Ford Coppola made other things after those triumphs. For me, the appeal of 1966 resides not just in a fantastic match with all the drama you could want, but also in the way that it stands alone as the only major silverware that the men’s team has ever won. I was also intrigued by how this triumph still resonates for people lime me – anyone under 50, in fact – who have no personal memory of it, and have come to it only at second hand or through Baddiel and Skinner’s ‘thirty years of hurt’.

Beyond that, it was fascinating to see that the majority of the moments in the Top 10 were individual or pairs events rather than team events. England’s victory in the 2003 men’s Rugby Union World Cup came in at No. 8, and the epic Ian Botham Ashes series of 1981 was one place behind it, but the rest were not team events. Andy Murray’s 2013 Wimbledon win went straight in at No. 2, followed by Torvill and Dean’s Bolero routine at the 1984 Sarajevo Olympics, Roger Bannister’s sub-four minute mile from 1954, and then key triumphs for Steve Redgrave, Bradley Wiggins, and Mo Farah. Intriguingly, Francis Chichester’s 1966 solo circumnavigation of the world was at No. 10, an impressive feat that I for one had assumed many people had forgotten about.

When it came to the heroines and heroes, lawn tennis legend Martina Navratilova and boxer Muhammad Ali topped the respective lists. The people who were polled clearly respected longevity and consistency in their sporting icons, as both of these athletes were at the top of their game for many years. It was refreshing to see only two footballers in the men’s list – Pele at No. 3 and George best at No. 7 – and also good to see aesthetic sports being valued, with Top 10 finishes for skater Jayne Torvill, and Olympic gymnasts Olga Korbut and Nadia Comeneci. Athletics was represented by Usain Bolt, Mo Farah, Jessica Ennis, Roger Bannister, Paula Radcliffe, and Kelly Holmes, and many other household names, from Ayrton Senna to Steffi Graf, made good showings. 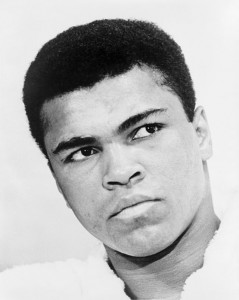 Of course, this kind of list making is essentially a bit of fun. Everyone will have their own favourite that gets missed, and everyone will have some alternative to the Top 10. The responses are incredibly relative, so sports that are huge in some areas (such as rugby league) got averaged out of the national picture – looking at this list, you would not know that Great Britain have won the men’s rugby league world cup three times, in 1954, 1960, and 1972). I was surprised to see no golfers in there, or anyone form the world of horse-racing, and disappointed (but maybe not surprised) that the 2012 Paralympics had not made a big enough impression on popular memory to be recalled. It is also obvious, but probably no great shock, that victorious England women’s teams seem to have had their triumphs forgotten. England women won the rugby union World Cup in 1994, and the England team won the women’s cricket World Cup in 2009, but they don’t get a mention. Indeed, it is perhaps ironic that as I write, the mainstream media is full of incriminations and navel gazing over one England team losing 2-1 to Uruguay in one World Cup, while paying virtually no attention to the other England team beating Ukraine 2-1 on the same night in their bid for 2015 World Cup qualification. No prizes for guessing which of these teams was made up of men, and which of women.

Overall, the lists showed an interesting mix of long and short-term moments, and icons from the past and the present. They suggest that the respondents value the Olympic Games, care about individual sports as much as team games, and hold such characteristics as longevity, dedication, character, and style in high esteem.