Here Comes the Story of the Hurricane

(With apologies to Bob Dylan for the title)

Each year, the Oxford Dictionary of National Biography (DNB) is updated to bring in famous and significant people who have recently died. This year’s intake to this essential reference work has recently been publicised in the press for its emphasis on what Vanessa Thorpe in The Observer called “rebels and mavericks”, including comedian Norman Wisdom, designer Alexander McQueen, and novelist Beryl Bainbridge. I’m delighted to have been involved in this process, as I’ve written the entry on the biggest sporting maverick amongst the new entrants, snooker player Alex ‘Hurricane’ Higgins (1949-2010).

Alex Higgins in 1968, at the start of his career

Higgins was a fascinating person to write on, and a big change from most of my previous contributions to DNB, like athletes Jack London, William Applegarth, Donald Thompson, and Christopher Brasher. Only athletics promoter Andy Norman, a deeply controversial figure both inside and outside the sport, has provided such a challenge: how to represent a miniature biography in a balanced way without denigrating the achievements or glossing over the more difficult aspects of the subject’s personal life. As DNB editor Lawrence Goldman put it in his interview with Thorpe, “nobody would be kept out because they were disreputable”, and there were many aspects of Higgins’ life that fell into this category. His widely publicised drinking (before, during, and after  matches) and acknowledged cocaine use, his extra-marital affairs, his frequent rows with officials, journalists, and fellow players, and his violent outbursts that got him banned from the game all spring to mind. And he is a classic example of the importance of the controversial aspects of family lives that Goldman noted when he said  “Our job is to represent their marriages, their children and even their bastards”, especially as Higgins denied his paternity of one child. I’ve had to balance this with his achievements in winning the world title twice, and the immense popularity and goodwill that his inspired in his brief spell as the people’s champion. The pathos of his later years, when Higgins, in declining health, lived out his life in relative obscurity and died alone, adds another twist to the difficult life.

Alex Higgins in 2008, two years before his death

Like many academics, researchers, and readers, I value the DNB for the way in which it provides short lives and a way into the fuller biographies of thousands of famous and notable individuals. Its grouped lives, such as those of the 1930s Foreign Office Glamour Boys or the key figures in the Suffragette movement, are also models in collective biography. As a sports historian, I applaud the way in which the editors have broadened the Dictionary’s remit to ensure that key figures from all areas of popular culture are now included alongside the project’s more traditional concerns. Higgins, a figure who could attract television audiences of millions to watch his dynamic snooker, and who could command more column inches on the front pages of the papers than on the sports pages, deserves to be in there, along with the other “rebels and mavericks”.

Access: A brief extract from my piece on Higgins appears in The Guardian. The DNB is a subscription service, available here. Most university and public libraries in the UK subscribe to it – check with your institution.

I've just made a small but, I think, useful discovery about one of the British Olympic competitors from 1908: her name. 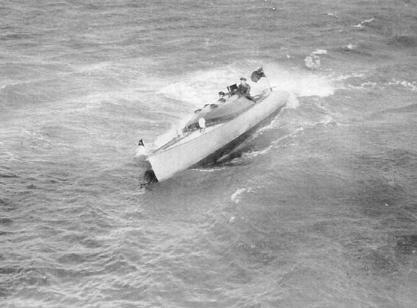 Motorboat Racing on Southampton Water at the 1908 Olympic Games

The 1908 Games included, for the only time in Olympic history, a motorboat racing competition  It took place in late August, a month after the stadium events, with races for three classes of boats taking place on Southampton Water. It was a small event, attracting only 14 competitors from two countries, Great Britain and France, and the atrocious weather meant that the organisers had to change the planned route on to more protected water.

It was an exclusive competition, as the costs of owning and maintaining a boat were high. We can get a flavour of its social tone by looking at some of the British competitors. They included the Duke of Westminster, Thomas Thorneycroft (of the Thorneycroft shipbuilding family), and Winchester St George Clowes, a captain in the Hussars. In this mix, racing Quicksilver in the B-Class race for boats under 60 feet in length, was a married couple, Mrs and Mrs John Marshall Gorham.

Motorboat racing was not specifically open to women in 1908: only lawn tennis, archery, and ice skating had that status, along with demonstration events in gymnastics and diving. However, like the sailing event, there was nothing explicit in the rules prohibiting women from taking part. And, just as the Duchess of Westminster and Frances Clytie Rivett-Carnac raced in the sailing, so did Mrs John Marshall Gorham in the motorboats.

In most sources, this sole female competitor in the motorboat racing is hidden behind the convention of a married woman using not just her husband's surname, but also his forename. Mrs Gorham appears by this name in contemporary press reports, with The Times drawing attention to her as 'an exa

mple of feminine endurance', and it is by this name that she has entered the record books and Olympic databases. Even Bill Mallon and Ian Buchanan, in their monumental and authoritative book on 1908, repeated the married name.

Now, thanks to the incredible research tool that is Ancestry, we can access census and birth, death, and marriage records, and put some real names to women like Mrs Gorham who were hidden by convention. The resources have always been there, of course, but the search and comparison facility of the online version makes it immeasurably easier for us to access them.

What we find for the mysterious Mrs Gorham is that her name was Sophia. She was born Sophia Hope Hallowes in Edinburgh in November 1881, the daughter of George Skene Hallowes, a Major General in the army. Tracing her through the Census and her marriage records, we can then develop a picture of her social background. In 1891, she was living in Kensington with her parents, her six siblings, and four domestic servants. In 1906, when she was 25, she married 53 year-old John Marshall Gorham, an electrical engineer and the son of a surgeon, at St Jude's Church in Kensington, and it was this married couple who raced Quicksilver in the 1908 Olympic Games. Sadly, they did not finish the race, the gold going to Thorneycroft in Gyrinus. We can also trace John and Sophia beyond the Olympics: to the 1911 Census, when they were living in Singleton in West Sussex, without children and with six domestic servants; to John's death in 1929 and Sophia's remarriage three years later; and to her death in Chichester in 1969.

I'm planning on carrying out some biographical research on British competitors at the 1908 Olympics. This tiny case study, which started purely with a desire to find out a name, gives us an inkling of how official records can help us shed light on the everyday lives of early Olympians.

Comments Off on Named At Last – the Mysterious Mrs Gorham, 1908 Olympian