Running through the Past 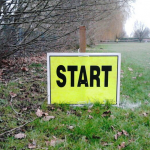 Yesterday, I ran the Winchester 10k. This was a bit of a milestone for me, as it was my first race since a big knee operation last year, so I approached it with some trepidation. It was all fine – I got round in 51 minutes, way below the times I used to run but a good 5 minutes better than I had done the route in training, and my knee held up. It was great to get back to the atmosphere of a road race, and to the supportive atmosphere that I have always found in the running community.

For an average runner like me, who is not trying to win anything except a personal race against the clock, 51 minutes provides plenty of time for thinking and looking, and for me yesterday I spent a lot of that time remembering other races, and thinking about the landscapes and townscapes that the races have taken me through.

Looking back, my favourite race was the Sarn Helen, a 16.5 mile hilly mixed terrain race in Lampeter, west Wales, where I went to university. It was organised by the wonderful Sarn Helen Running Club. This was the ultimate event for all of us involved with the university’s running club, and completing it was a rite of passage to take one from being just a club runner to being a runner. I tried it unsuccessfully once, breaking down with nothing left in my tank after only 13 miles, but made sure that I was properly prepared the next time. I completed it twice in all, and look back on it fondly. The route covered some ancient sites, including the Iron Age hillfort of Castell Allt-Goch, and it took its name from the Roman road that ran the length of Wales. My memories here are all about the pride of the achievement, the camaraderie of my team mates and the club runners, and the beauty of an ancient terrain.

I ran a different kind of historic route in Rhayader, where the 20 mile race goes around the flooded valleys

of the Elan Valley and the epic dams of Craig Coch and Caban Coch. Here was a story of engineering , an exhausting run through a landscape that blended untamed wilderness with Edwardian engineering. I came closer to sports history when I ran the Windsor Park half-marathon, a distance that owes its existence to the 1908 Olympic Marathon which started on the lawns of Windsor Castle. With that castle as our backdrop for the race around the park, it was impossible not to feel a sense of history.

Every race that I've run has some kind of historic resonance, from those in Victorian city parks to those at 1970s urban athletics stadiums. Running in a race provides a unique perspective, especially when roads are closed and we runners take over from the motorists. We can see things that are not always visible, and we can think about the links between town and country, nature and culture, and past and present.

Yesterday's race around the roads just north of Winchester, for example, took us under a brick-built Victorian railway bridge and a concrete 1970s A-road bridge, and past car showrooms, watercress farms, and a Norman church. We started near the modern River Park Leisure Centre, and ran past the site of a 1930s lido, now a car park. It was a race through a landscape of continuity and change in worship, work, leisure, transport, and industry.

I'll keep working on my running, and, my knee willing, I aim to do some more races. With the luxury of being a mediocre runner, and my inability to stop looking for historical resonances wherever I go, I look forward to tracing more routes through the past.

Comments Off on Running through the Past