Two weeks ago, southern England was hit by heavy snowfalls. People from other parts of the world where deep snow is a permanent feature in winter must laugh at our inability to cope, as schools, shops, and businesses closed in the face of a few inches of the white stuff. The children loved it, of course, and we made our annual sledging trip to St Catherine’s Hill. The hill, just outside Winchester, has a place in the history of football, as it was here that Winchester College’s unique version of the game claims its origins. When the snow comes, though, no-one cares about that, as the slopes are taken over by hundreds of people sledging. With the schools closed, children and their parents were out in force, augmented by students from the University and the Art School who were happy to take the afternoon off. It had a genuine community feeling of a town at play. The sledges on display ranged from proper purpose-built ones, many of them bought in a hurry from the city’s only sport shop that managed to stay open on the snowy day, through to homemade efforts and improvised craft: fertiliser sacks, laundry baskets, and even tea trays that looked as though they may have been borrowed from the Art School’s canteen all did service.

The afternoon struck me as deeply torn in time. On the one hand, this kind of play depended on all sorts of features of modern life, from the mass produced sledges in dura

ble plastics through to the comfortable clothes that kept us all warm. In other ways, it was almost pre-industrial. The time discipline of the normal school and office day was overturned, and we were out as a community, playing in natural spaces rather than the cultural spaces of stadiums or playgrounds, and the play was made possible only by the weather. The fact that many people improvised their sledges – the tea trays and fertiliser sacks – only added to the sense that this was an old way of playing. 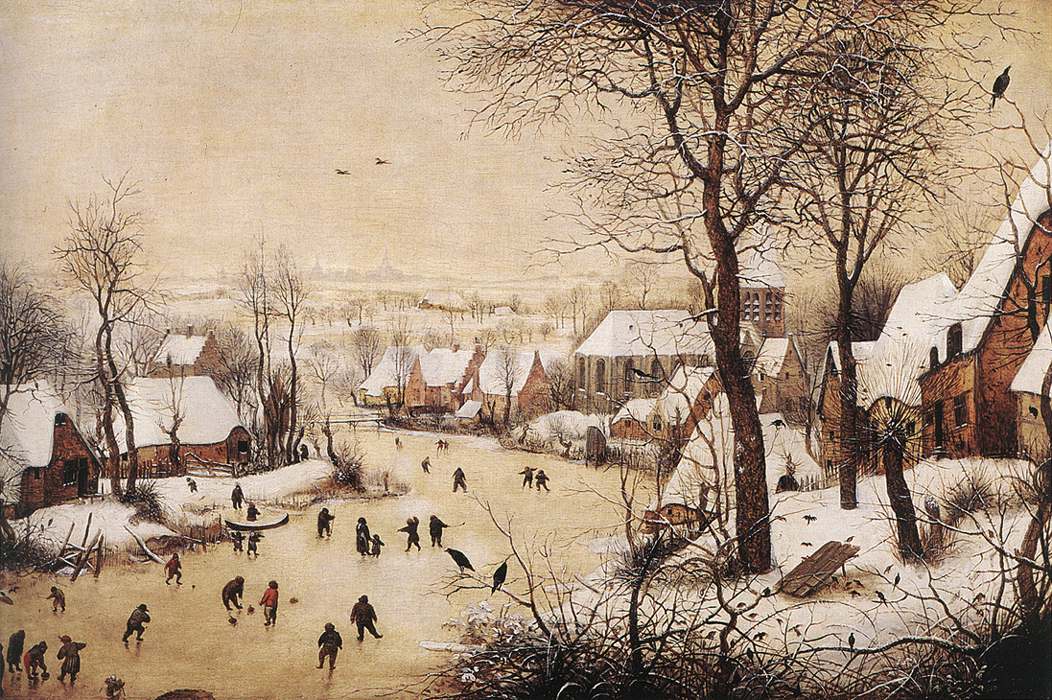 It reminded me strongly of a painting by Pieter Bruegel the Elder that I use in my sports history classes. Winter Landscape with Skaters and Bird Trap, painted in 1565 and now in the Musées Royaux des Beaux-Arts, Brussels, shows a snowy scene in which the townspeople have taken to the frozen river to play. Some skate, others play on sledges, some play a game that looks a lot like curling, while the group in the bottom left-hand corner are playing a golf-like game on the ice. Leaving aside any allegorical meanings the painting has, it is a wonderful representation of spontaneous play using improvised equipment, found spaces, and the weather. It’s too easy to think of our ways of playing as purely modern, and it’s useful every now and then to sit back and recognise some ways of playing that transcend time and culture.

Comments Off on Winter Landscape with Sledgers and Tea Trays