The Olympic Games start in July, and Olympic stories are beginning to dominate the news. The new venues are holding their test events, selectors in all Olympic sports are starting to name their final squads, and another wave of ticket sales has meant that more people have now secured their seats at the show. It would be hyperbole to say that the nation is gripped with Olympic fever, as there are plenty of people who are not interested or who are vociferously oppositional to it all, but it is safe to say that the summer’s stories are being mapped out now. 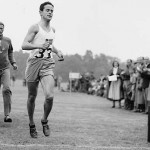 William Grut of Sweden in the 1948 Modern Pentathlon, organised by the Army at Aldershot and Sandhurst

The story that has drawn the most debate has not been a sporting one, however. It has been the practice security operation, codenamed Exercise Olympic Guardian, that has divided opinion and brought some basic truths about the Games to the fore. Since 9/11, and with the horrendous examples of Olympic terrorism at Munich in 1972 and Atlanta in 1996 as precedents, the British government is understandably flexing its muscles. The exercise is, hopefully, serving as a deterrent to terrorists and reassuring people that the Games will be safe. However, critics have drawn attention to the increasing militarisation of London’s streets, and the inevitable alienation that this will bring, and are asking if the Olympics are really worth bothering with if they bring so much hardware and paranoia in their wake.

It’s instructive, as ever, to look to history here for a sense of perspective, and the obvious place to look is London’s last Olympics, those of 1948. The military presence then was huge: but it was nothing to do with counter-terrorism, and everything to do with getting the job done.

Coming just three years after the war, the Olympics were held in a Britain that still had many trappings of wartime in place, like rationing, conscription, and a heavy state role in the economy.

This meant that the Games were characterised by a high military presence at every level. The Olympic torch, an intriguing British revival of a Nazi invention, was carried across the Adriatic and the Channel on Royal Navy ships. The Army and the RAF accommodated thousands of competitors, at West Drayton, Uxbridge, Richmond Park, Sandhurst, and in the barracks at Aldershot. The War Office, the Admiralty, and the Air Ministry had representatives on all the committees that planned the Games, while some of the sports, like the Modern Pentathlon, the equestrian events, and the shooting, took place at venues owned by the military.

It was a very different kind of military presence to the one we will see this summer. Nevertheless, 1948 is still an important part of the history of the close links that exist between the state, the armed forces, and the Olympic Games, in democracies as well as dictatorships.